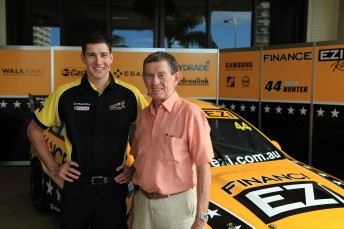 Young Ben Grice has designs on crafting a career in NASCAR as he embarks on his first full national Championship.

The 22-year-old Grice will launch a full assault on the Suzuki Swift one-make series as part of the growing Finance EZI operation with the team’s boss Maurie Pickering undertaking a ‘department of youth’ policy.

Gold Coast-based Grice, the son of double Bathurst 1000 winner Allan Grice, is drawn towards a career following in his dad’s footsteps.

“I’d love to be in a touring car,” Grice told Speedcafe.com

“That is one of my goals. I have a strong interest in motor racing in the States in NASCAR.

“I’ve had experience in Speedway and had some success and that’s a separate discipline again. But at the end of the day it’s a car race and it doesn’t matter if it’s front or rear-drive. I enjoy the competition and I love racing hard and rubbing doors and racing fair.”

Allan Grice was the first Australian driver to qualify a NASCAR, an Oldsmobile Cutlass, in the signature Coca-Cola 600 event at Charlotte in 1987, a moment he repeated two years later in a Pontiac Grand Prix.

But he is loathe to stipulate a specific end goal for his son, given the unpredictable nature of motor racing for young drivers emerging through the ranks.

“There is no target for Ben,” the former touring car ace Grice said.

“That will come through and present itself. He’s a bit tall for F1 but he loves the concept of NASCAR and V8 Supercars. Having a target at this stage is fraught with disappointment. But he will go a long way in motorsport, I’m very confident of that.”