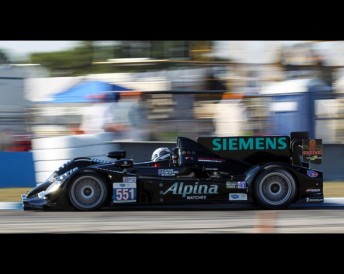 Former Penske sports car and IndyCar driver Ryan Briscoe has been confirmed to make his debut in the Le Mans 24 Hour classic in June.

The Sydney-born Briscoe will pilot the Level 5 Motorsports team’s lone HPD ARX-04b in the twice-around-the-clock race at La Sarthe from June 22-23.

It will be a busy month for Briscoe who is also taking up the opportunity to drive in a one-off deal for the powerful Chip Ganassi squad in the Indianapolis 500 at the end of May.

At Indy last year Briscoe claimed the pole position for Penske however he lost his seat in that team in which he also drive the Porsche LMP2 RS Spyder in the American Le Mans Series in 2007 and 2008.

Briscoe has also been confirmed to stay with the Level 5 Motorsports squad for the remainder of the ALMS season after taking the LMP2 class win in the Sebring 12 Hour race earlier last month.

He will be in action for Level 5 at the Long Beach round of the ALMS this weekend.

“I’m very excited about this. I’ve been interested in going to Le Mans for a few years and this year was the perfect opportunity for me to go over there and get some experience,” was quoted by Autosport.com

“I’m not saying it was top of my list of priorities, but not having a full-time IndyCar drive gave me the chance to do it, and with a team that is going there to win the class.”

After being released from Penske at the end of last year, Briscoe is now embarking on the most diverse season of his career where he is also expected to be a member of the Holden Racing Team’s endurance line-up alongside James Courtney.

Briscoe will link with Marino Franchitti in the ALMS and also at Le Mans.