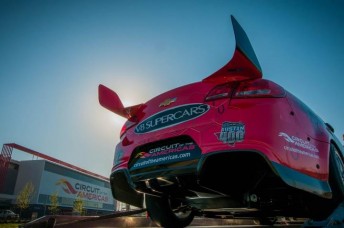 Holden factory driver James Courtney and new championship threat Fabian Coulthard will cut promotional laps of the Circuit Of The Americas track next week ahead of the historic V8 Supercars round at Texas in May.

The pair will fly to Austin in time for the MotoGP round at the COTA track before staying on for a host of promotional duties including track rides next week.

The V8 Supercars-owned Holden Car of the Future will be used for the rides, having arrived in the USA last month wearing Chevrolet SS badgework.

The V8 Supercars Championship will make its debut in the US at the Texas 400 from May 17-19.

“It’s going to be good, it’s a great opportunity to be the first guy to drive a V8 Supercar on American soil is pretty cool; something I never dreamed of. The facility looks amazing and I can’t wait to get over there,” Courtney said.

Coulthard, who together with his BJR team-mate Jason Bright have both won two of the nine Championship races to date this season, is eager to be able to do some early homework on the new Texas track.

“It’s a good opportunity to get an early look at the track and do some rides for some people. We will also get to have a look around and see the sights before everyone else,” Coulthard said.

The V8 Supercars push into the North American market remains one of its boldest exercises to date as it attempts to enter a motor racing landscape saturated by NASCAR.