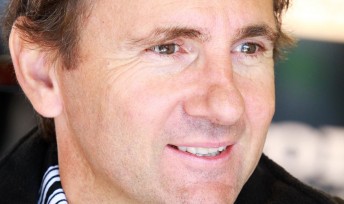 The 47-year-old Seton is expected to contest the remainder of the season with Bob Pearson’s Pro-Duct team, starting with the Sydney Motorsport Park event.

Seton, whose most recent race meeting was the 2012 Supercheap Auto Bathurst 1000 where he drove in the Touring Car Masters, says he’s looking forward to getting back behind the wheel.

“The great thing about this category is that the cars are fantastic,” he said, having competed with the Pro-Duct outfit in the 2009 and 2010 Bathurst 12 Hour races.

“We get enduro races as well as sprints, but they (the enduros) are limited to an hour so there are no pit stops which helps keeps the costs down. It’s a good mix of being professional and affordable.

“To have 30 cars turn up three weeks after a major event at Bathurst (the opening round at Easter) is a credit to everyone involved.”

Seton has not tested the Evo that he’s slated to race and will have his first taste of the car in practice on Friday.

It was hoped that Seton would appear in this year’s Australian Manufacturers Championship, but a clash between his Bridgestone backing and the category’s new control Hankook tyre deal is thought to have scuppered such a plan.