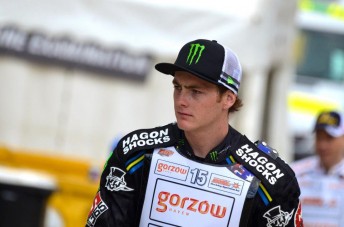 Darcy Ward has proven he is back to form after his horror crash two weeks ago with two solid performances in the lead-up to this weekend’s Speedway Grand Prix at Bydgoszcz in Poland for both his Polish club and the Poole Pirates overnight.

Ward suffered a soft tissue injury to his troublesome left wrist. Fears that it may have dislodged metalwork inserted after a break last year were allayed when he underwent treatment at the Bournemouth Football Club.

The Queenslander made his return for Polish side, Torun, in spectacular fashion at the weekend, annexing a solid 13 points in the enormously tough Polish Extraliga.

He got through this morning’s League clash (Australian time) between his British Club, Poole Pirates and Wolverhampton with eight points and suffered a scratch to his thumb after a crash during a frantic heat 13.

The match was significant as it was the first loss at home for the Pirates since September 2011.

World Champion Chris Holder was another to place eight points in his kit bag at the end of the night, whilst Victorian Ty Proctor scored eight points for the victorious Wolves.

Ward declares himself ready for the Bydgoszcz stoush.

“It’s going to be cool to get back into (Grand Prix competition),” the Queenslander said. “Bydgoszcz isn’t my favourite track, but it’ll be good. I’ll get the practice in and hopefully it will all go to plan.

“I don’t mind Bydgoszcz; I just never do any good there. Hopefully I can change that.”

He ended the New Zealand Speedway Grand Prix atop the points charts after the 20 heats, however missing the gate in the semi-final cost him any opportunity of a podium on his fulltime Grand Prix debut, which he admits was part of the learning curve he is on.

“I just made a mistake in the semi-final, which was a bit of inexperience, so hopefully that won’t happen again,” Ward reflected. “You know you’ve got to step it up because everyone else will. But it’s still fun out there and I like what I’m doing.

“It was very serious (in New Zealand), but I enjoyed that. You have to step up to another level and race with all the big boys, which is what it’s all about. Hopefully I can keep it going.”

Ward’s 12 point NZ haul sees him enter the Polish race fourth on the ladder, some three points off the Championship lead, however with a pair of Poles in Tomasz Gollob and NZSGP winner Jarek Hampel at the point, it is going to be a tough ask to overcome them in front of the rabid home crowd.

Defending World Champion Holder enters the second round of the Championship seventh overall with nine points to his credit.

This is the first time Bydgoszcz has run a Speedway Grand Prix event since 2010. The winner of that event was Andreas Jonsson who lies two points ahead of Holder in the 2013 standings.