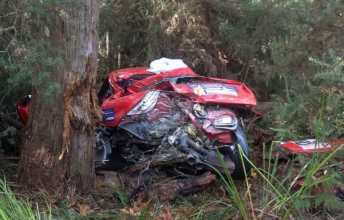 The remains of the Porsche which claimed the life of a driver. Pic: ABC (Jonathon Gul)

A competitor has been killed and a navigator seriously injured in an accident on the first competitive stage of the Targa Tasmania tarmac rally this morning.

The identity of those involved are yet to be released, although police have confirmed that the driver was in his 70s and from New South Wales.

“We are deeply saddened to report that there has been a fatality at Targa Tasmania Rally this morning,” read a joint statement from CAMS and event promoter Octagon.

“Both CAMS and Octagon are currently working with the relevant authorities and will provide further information once next of kin have been advised.”

The single-car incident occurred on Porters Bridge Road at Exton, with remaining competitors diverted to another stage while police attend the scene.

The navigator has been transferred to the Launceston General Hospital in what police have described as a serious condition.

The accident marks just the second fatality on the Targa since its first running in 1992 following the death of navigator Ian Johnson during the fifth edition of the event.