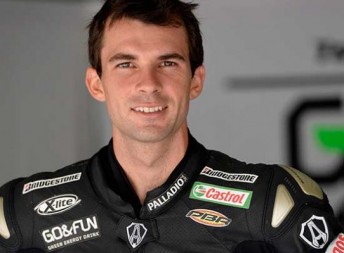 The Perth racer Bryan Staring is the new Australian star on the MotoGP scene.

The 25-year-old was hand picked by the Gresini Honda outfit to develop its CRT bike in the premier road bike category.

A three times Australian Champion (125cc – 2004, Supersport 2009 and Superbike 2010), Staring won’t be challenging the likes of Lorenzo or Rossi this year but is a cool customer and is highly cherished by his Australian motorsport fans.

With the second round of the MotoGP World Championship due to take place this weekend at the Circuit of the Americas in Austin, Texas (where the V8 Supercars will be in a few weeks time), Speedcafe.com caught up with Staring fresh from his MotoGP debut for the Fun&Go Gresini team in Qatar.

Speedcafe: Can you describe the feeling of walking into the Losail Circuit for the first time knowing you were a fully-fledged MotoGP rider?

Bryan Staring: Yeah that was awesome, to tell the truth, I was happy I got to park in the best car park! Must mean you’ve done something right (laughs)! No, it was a good feeling, but I’ve had a few months now to realise where I am and its very real.

Speedcafe: Compared to what you expected, how did you find your first MotoGP and was there something that surprised you more than anything else?

Staring: Well, yes and no. I didn’t expect to crash out on lap 2! But obviously there were some more lessons I needed to learn. I think it’s better to do all the tough learning now. I really didn’t even get a chance at the race with a crash so early. But anyway, that’s life and we’ll move on.

Speedcafe: The debut didn’t go as expected, what happened and what do you take away in a positive sense from the Qatar weekend?

Staring: I’ve learned my lesson. I know I have to be much more cautious than normal at the start of the race. We’ll put that one down to experience and move on.

Speedcafe: You have come from the international 1000cc Superstock category (where he won three races last year) – what are you finding to be the major difference from what you were riding to the Gresini MotoGP bike?

Staring: Well, there are so many things purely about the bike, tyre, frame, brakes, electronics – you name it – they are all much more advanced than I’m used to. Then there’s the circuits, the teams, atmosphere and the paddock that is all new to me as well. It’s quite a lot to take in. They are a close knit bunch at Staring’s Go&Fun Gresini Team!

Staring: No not really. It’s essentially a race within a race. That’s how the teams and riders see it. I’m not in the GP race, just the CRT race. I do the best I can against my competitors and that’s that. I’m not frustrated.

Speedcafe: Does having someone with Alvaro Bautista’s experience in the Grand Prix paddock prove to be a great help? Is there a lot you can take from Alvaro (considering he is on the full Honda satellite MotoGP bike)?

Staring: Some things can still be relative. Like if he has found grip from going harder then we probably will too. But certainly technical information is not useful at all.

Speedcafe: The Fun&Go Gresini operation is one of the most comprehensive in the paddock with representation across every major category. How are you finding the team and how advanced – or otherwise – is your Italian?!

Staring: Yes it’s a real privilege to be involved with such a high level and experienced team. They are awesome, they all speak fantastic English so there’s no real pressure on my Italian, which sucks! But I do try hard.

Speedcafe: CRT is still very new and Fausto Gresini has given you the responsibility of developing the program for his team. How are you handling that, along with getting used to new circuits, a new team and new paddock environments?

Staring: Fausto and my team are with me, they know the challenges I face and together we are taking on this project. Every person involved is doing the absolute best they can, so I don’t feel any extra pressure in that particular sense. But I always strive for perfection, so it’s a work in progress.

Speedcafe: Is there any plan that you will get to taste the full MotoGP bike this year, or are you locked solely into the CRT program?

Staring: I’ll only ride the CRT bike this year.

Speedcafe: You are the only Australian in the field, do you feel pressure to follow in the footsteps of Casey Stoner – or for you is it very much a concentration on your own development?

Staring: No, I’m not Casey or his replacement. I’ve worked hard in a lot of different championships to arrive in this position and I’ve got my own agenda.

Speedcafe: Has there been much talk around the MotoGP paddock about Stoner’s absence or is it just a matter of not looking back and getting on with the future?

Staring: If there has been, people certainly don’t speak with me about it.

Speedcafe: What has the interest and support been like from Australia since the announcement was made you were going to be in MotoGP?

Staring: It’s been amazing. I can’t believe the amount of support I’ve had. It’s really been awesome. Makes me really look forward to Phillip Island.

Speedcafe: Overall, what are your hopes for the 2013 season?

Staring: Just to achieve my absolute best and leave nothing on the table. I can’t know how I will go. But I believe in the bike, team and the rider so I think when I gain some more experience we’ll be very strong.