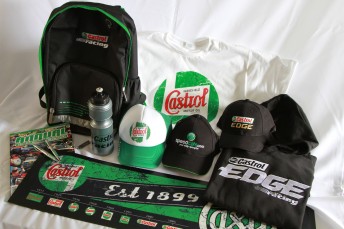 DaveTE50 and XLent1 Racing pick up this fantastic prize pack for their respective round wins!

Rounds two and three of the 2013 V8 Supercars Championship has been run and won, and while most people will consider Will Davison the leader of the title, there’s another competitor who has taken an early lead.

Top honours in the Castrol EDGE V8 Predictor currently sit with with ‘DaveTE50‘ who holds a one point advantage over  ‘Schultzys 500‘ in the overall standings.

Round 1 leader ‘GR8‘ continued their strong form into the Symmons Plains round by maintaining the lead after the Tasmanian event but a massive 60 points (52% accuracy rate) by ‘DaveTE50‘ saw him leap 298 spots up the V8 Predictor ladder to take the lead after the ITM400 Auckland.

International Rugby player James O’Connor leads the way in a dead heat with Oliver Gavin on 78 points. The Speedcafe.com team are nipping at their heels just two points back on 76 as current V8 Supercar driver Russell Ingall has some catching up to do as he sits well back on 45 points.