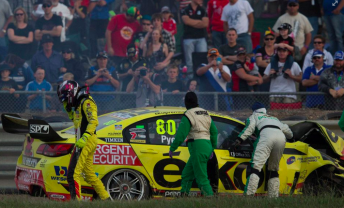 Amid heightened brand rivalry, Nissan opened up its racing operation at Braeside in Melbourne where it was put on a jig, repaired and straightened.

“I can’t thank Todd (Kelly) enough for helping out. I reckon it has easily saved us four days not having to send it back up to Queensland,” Dumbrell said.

“Nissan have got all the Triple Eight front end and the rear end being controlled obviously meant their (Nissan’s) jig would fit. Todd was very helpful with it.”

Originally it was planned for the car to return to Brisbane at the Banyo headquarters of its builder Triple Eight.

The #80 ekol Commodore of Scott Pye suffered a massive front-on accident when it careened into the Turn 2 wall at high speed after the brakes failed during the Symmons Plains round more than a week ago.

The chassis was so badly damaged that it was ruled out of the Pukekohe meeting last weekend.

While the team’s second Commodore for Dean Fiore made the trip to New Zealand, the damaged #80 Holden was dispatched to Nissan.

Nissan Motorsport team owner/driver Todd Kelly and Dumbrell worked out a deal for the Braeside squad to help repair the car which has since returned to the LDM base in Nunawading.

LDM are busily working on the bare shell but are confident it will be ready for Pye to test at Winton next Monday.

“We are not mucking around and we need to shakedown the car to see if everything is working okay,” Dumbrell said.

The team avoided a huge penalty for not turning up at Pukekohe when the force majeure rule was invoked.

Pye, who escaped any major injury in the crash, will be back in the car for the next round at Barbagallo from May 3-5.