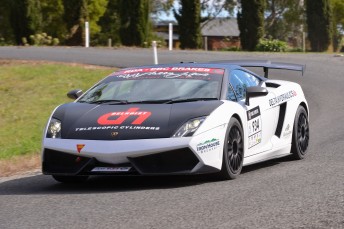 The 2013 Targa Tasmania has got underway with Jason White setting the standard on the opening day aboard his Lamborghini Gallardo.

White set the fastest time on both the opening two stages and won the official Temco Prologue, used for seeding the cars when the race proper gets underway from Launceston on Wednesday.

White, who is looking to defend his 2012 Targa Tasmania title as well as secure a second straight CAMS Australian Targa Championship, looks like again setting the pace across the 600 competitive kilometres and 40 stages that will follow over the next five days.

He finished the 4.5 kilometre prologue 6.15 seconds quicker than Matt Sims in his 2013 Nissan GT-R, with former Tasmanian Matt Close third, a further 2.29 seconds further back.

His support crew will be working hard overnight to have the car up to speed for the full opening day that takes the crews up towards Devonport and back to Launceston.

2009 and 2011 Targa Tasmania winner, Queenslander Tony Quinn, also had issues with his GT-R, struggled to get maximum power after experiencing mechanical issues.

“It’s a good start and it’s the start we always look for,” White said.

“We’re happy with it and it’s great to get here again, blow the cobwebs out and try and become at one with the car again.

“It’s a fair time between drinks from event to event, so it’s nice to get back in, and the car feels great.

“We could have won the prologue by more than we did, but I stalled the car on the start line and it probably cost us a couple of seconds.”

The man who has won the last six Classic Outright titles, Rex Broadbent, made an unexpectedly quick start in his 1974 Porsche 911 Carrera RS, setting the fastest time on both the opening Kayena and George Town Temco Prologue stages.

“This year I think we’re really up against it as the weather forecast looks dry for the whole event and my Porsche just hasn’t got the power to keep with the V8s unless the weather turns wet,” Broadbent said.

The full opening day takes the 200-car field across to Railton in the state’s north for the lunch stop, before the real challenge begins on the Mt Roland and Sheffield stages on the afternoon run back into Launceston.

Check out the video report