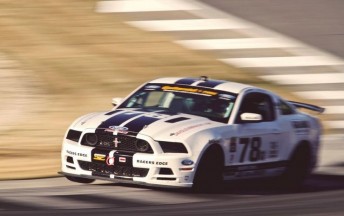 The Mustang that Davison will driver this weekend

James Davison, the cousin of V8 Supercars stars Will and Alex, will compete in multiple rounds of this year’s Grand-Am Continental Tire Sports Car Challenge, beginning this weekend at Road Atlanta.

The 26-year-old has raced sporadically in the USA since 2005, moving through open-wheel classes Formula BMW, Formula Atlantic, Star Mazda and Indy Lights as he chased an IndyCar Series ride.

Making occasional appearances in both prototype and GT machinery in the Grand-Am Series over the last three years, Davison will step into Grand-Am’s Continental-backed support class this weekend.

Davison will compete in a Racer’s Edge Motorsport Ford Mustang alongside gentleman driver Joel Janco, and says he expects to do at least four rounds across the season.

“I’m excited to have a busy sportscar schedule this year,” he said.

“As a driver without the crucial sponsorship behind me to get the IndyCar break, sportscar racing is where all doors have opened up in recent years.

“I’m looking forward to going back to Road Atlanta this weekend. I’ve always ran well there in the past and aim for a good result.”

The third-generation driver is also understood to have held talks with several V8 Supercars teams about racing in this year’s endurance events, and is one of several to have been linked to a potential co-driver role at Dick Johnson Racing.