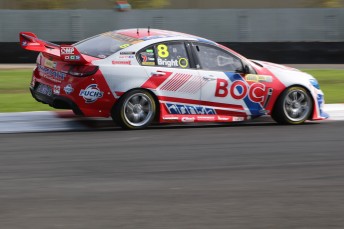 Jason Bright on his way to Race 9 victory at Pukekohe

The resurgent country-based Brad Jones Racing operation had more to gain with the new specification V8 Supercar than rival teams according to veteran driver Jason Bright.

BJR is a customer of several teams including HRT, Triple Eight and FPR and continue to validate its early season form as the benchmark of the field.

Bright is sixth in the Championship one spot behind team-mate Fabian Coulthard and believes there are more gains to come from the Commodore team.

“I blew it a bit in Adelaide otherwise we could be giving it a real shake right now,” Bright told Speedcafe.

“We had more to gain out of Car of the Future than anyone and I’m very satisfied that has proven true.

“I think there is still more to come.”

Bright, whose best Championship finishes since his full-time debut in 1998 have been third in 2001 (HRT) and 2004 (PWR), has detailed the reasons why BJR have emerged as a serious Championship contender.

“We’ve had the same guys the last four years so we’ve got good stability. We all work really well together. Every single podium we get, the whole team is down there. It’s just a great environment,” he says.

“The last couple of years we’ve probably been behind the eight-ball which has made us work extremely hard. I think that work ethic that they’ve put in is paying off now.

“Hats off to Brad Jones and the engineers they’ve done a great job choosing all the right bits to put in the car.

“We buy off all three of these teams (HRT, Triple Eight and FPR). We sat back and looked at what everyone was making and we chose well the parts that we put in the Car of the Future.

“We still make our own chassis and mill parts ourselves but we buy designs off teams and the guys have done a great job of putting it all together.”

BJR has its first test day of the year at Winton on April 22 ahead of the next round at Barbagallo in early May.

The team had planned test days before and after Adelaide and the grand prix meeting but time constraints and other car related issues have prevented the team from carrying out the scheduled tests.