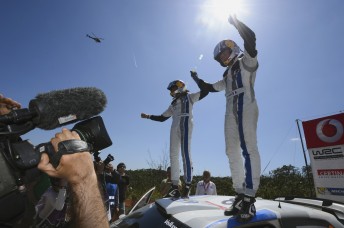 Ogier makes it a hat-trick of wins for Volkswagen

Having already won in Sweden and Mexico, Ogier now holds a 54-point cushion over Hirvonen in the championship who finished second in Portugal behind the wheel of his Citroen DS3.

“Unbelievable. What a rollercoaster ride here in Portugal!” Ogier claimed.

“I am overjoyed with the win. First the illness, then the brutal stages, which really push a rally car to the very limit.

“When we had the problem with the power transmission on this morning’s opening stage, I thought: ‘That’s it Séb. The rally is over.’ Fortunately we made it to the service and the guys did a fantastic job there.

“I will now try to get as much rest and regain as much strength as possible in time for Argentina.”

Ogier’s team-mate Jari-Matti Latvala had to surrender second place overall after a broken front-right drive shaft forced him to contest the 52.30-kilometre Almodovar stage (the longest in the WRC) with rear-wheel drive only.

He did, however, overcame the hindrance to hold off  Qatar M-Sport driver Evgeny Novikov and earn his place on the podium. 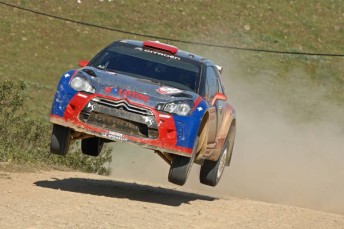 “Fourth place is a very good result for us, but still I was not so happy with the times. It was a difficult weekend for us. I was pushing on the stages but for some reason the times just weren’t where they needed to be,” said Novikov.

“This [fourth place] is definitely the maximum I could have achieved this weekend, so I am happy with that. Now we just need to make sure we work hard and come back stronger in Argentina.”

Esapekka Lappi ended up taking a dominant victory in the WRC2 category, however it was former F1 race winner Robert Kubica who impressed after moving into second on the opening day before a multitude of technical issues saw stop to a podium result on debut.

“For my first gravel rally, I think I have shown good pace on the stages where I didn’t have any problems,” said Kubica.

“Overall, it has been pretty positive, although we have been a bit unlucky at times.”

The next round of the World Rally Championship starts in less that three weeks when Rally Argentina gets underway on 1 May.

Video highlights from Stages 12 and 13 on Sunday

Video highlights from the final two stages on Sunday