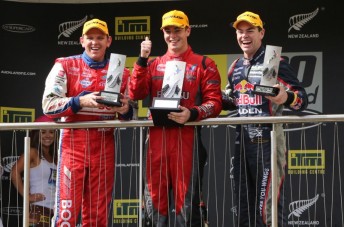 Jason Bright (left) and Scott McLaughlin (centre), seen here on the Race 6 podium with Craig Lowndes, both won races at the weekend

With as many as four race winners emerging from each V8 Supercars Championship event in 2013, has the time come to revert to the tradition of recognising round winners?

The practice of awarding a round winner was scraped by the category in 2009 in an attempt to give each race more identity.

That season, which also marked introduction of the soft compound tyre, saw a widespread shift to running one race each on Saturday and Sunday, with separate podiums and trophies to boot.

In 2013, however, nine of the 14 rounds have three races or more, opening the door to the possibility of awarding as many as four different winners per weekend, as seen at Pukekohe.

Only the advent of the Jason Richards Memorial Trophy, which was bestowed to the weekend’s highest points scorer, Jason Bright, ensured that a clear winner was recognised.

Weighing up the positives and negatives from each system, should V8 Supercars return to recognising round results and winners?

Vote now on this week’s edition of the Pirtek Poll.