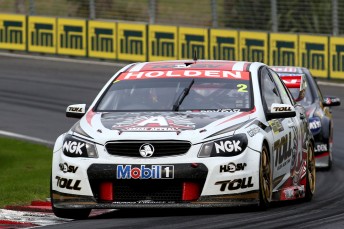 The Holden Racing Team will go into battle at the next V8 Supercars round sporting crucial upgrades to its VF Commodore package that will be tested for the first time at the Barbagallo circuit.

Arriving ahead of the Perth round from May 3-5 are improvements to the HRT’s engines and suspensions as the factory squad works toward snapping a long drought that will not be tested until Friday practice at the Perth circuit.

The evolutionary improvements are vital to the HRT’s progress that has yielded podiums and promising speed over the last few races.

Team spearhead Garth Tander recorded the HRT’s last victory in the Bathurst 1000 when he was paired with young Nick Percat who escaped a brush with the wall in 2011.

Although both Tander and the team’s principal Steve Hallam do not view the upgrades, which are deemed significant, as the magic bullet to immediately arresting their winless streak, they remain optimistic of closing the gap on the Albury-based Brad Jones Racing Commodore team.

“We are probably not going to have a chance to test those things before we go to Perth which is unfortunate. So we will sort of be testing in the public.

“And they are pretty significant changes. But we feel we have got enough understanding of what we need to do with the car in implementing these changes mainly on the suspension side.”

Hallam remained reserved about the prospects of returning to glory, saying that the operation’s policy is of continual development.

“When you think that we almost doubled the amount of championship races in New Zealand as we’ve had all year (nine) the pace cracks on,” Hallam told Speedcafe.com.

“It’s coming together. I don’t want to get ahead of ourselves. If we do everything right it will be a successful time.

“The pitlane is full of clever people and they all have a range of problems in terms of understanding the car. The people who do the best job over a weekend will reap the immediate success.

“Everyone is trying to understand the car and trying to do a consistently good job.

“Obviously we want to win but we’ve got to focus on the process, not the outcome.”

“Garth was solid as was James Courtney at Pukekohe. James was unfortunately pitched into the gravel a couple of times so I don’t think we’ve seen the best of James.”

Tander occupies fourth in the championship but is not under the illusion that the factory Holden squad is close to having the same overall race performance as BJR.

“ We had good speed at Pukekohe, but we are not pretending to say we have the same speed as the BJR cars.

“They are clearly the fastest cars. We feel we are making gains and we are getting everything out of the car that we can get at the moment.”