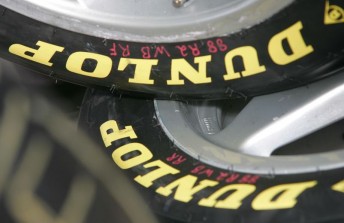 Dunlop has been the control V8 Supercars tyre supplier since 2002

Dunlop is synonymous with both the motoring and the motorsport industry, and is the current control tyre supplier to Australia’s premier category, the V8 Supercars Championship.

“The Dunlop heritage stands on its achievement in racing and being able to deliver the performance and technology we learn on the track to our tyres on the street,” said Dunlop marketing director, Jaime Hardley.

“At Dunlop, we have shared a passion for motorsport and being an industry leader in everything we do for 125 years.

“While Speedcafe.com may not have been around for as long, we have found a partner that shares this same dedication to motorsport and are excited to be part of their team.”

Dunlop’s Australian racing heritage is headlined by 26 victories in Australia’s marquee endurance race, the Bathurst 500/1000, including the last 11 as the control tyre supplier.

Speedcafe.com welcomes Dunlop to its Platinum Partner group and according to marketing manager, Leisa Emberson, it will provide a new opportunity for Speedcafe.com readers.

“Dunlop’s dedication as the official control tyre to the V8 Supercars series since 2002 has shown the brand to have a huge presence and involvement in the sport both on and off the track,” said Emberson.

“Having a company that has built such a strong presence in the motorsport industry like Dunlop is a fantastic addition to Speedcafe.com.”

Dunlop joins a number of leading companies in the Australian marketplace as a Platinum Partner, including Castrol, Coates Hire, Armor All, Norton, Crimsafe, IRWIN Tools, Finance EZI and Pirtek.

During 2012, Speedcafe.com expanded its offering into New Zealand with a bespoke Speedcafe.co.nz website.