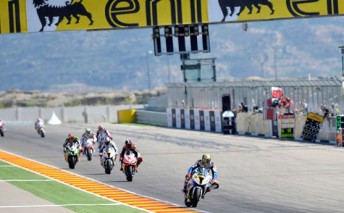 Chaz Davies was too strong at Aragon

BMW rider Chaz Davies has closed to within 22 points of World Superbike Championship leader Sylvian Guintoli by winning both races at the second round in Aragon, Spain.

The Briton benefited from mechanical problems to Eugene Laverty and Tom Sykes, who both pulled out while leading, to win the opener before dominating Race 2.

Guintoli took second in both races, with Marco Melandri and Sykes filling the podium in Races 1 and 2 respectively.

Aprilia’s Davide Giugliano managed fourth in the second encounter having been set for the same position in Race 1 until suffering a technical issue on the final lap.

Further mechanical issues for Laverty in Race 2 ensured the formerly joint championship leader has fallen to third in the standings, 40 points behind Guintoli.

Round 3 will take place at Assen, Holland, in two weeks time.

Watch video of Davies speaking after the second race