Will Davison takes bitter-sweet win for FPR in Race 8

Will Davison takes bitter-sweet win for FPR in Race 8 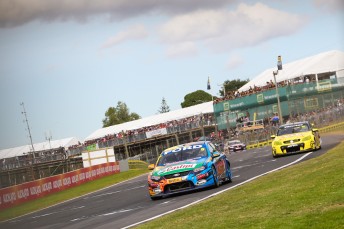 Will Davison claims his first win of year in Race 8

It marked the first win for a Ford V8 Supercar since Marcos Ambrose won nine years ago at the South Auckland circuit in a Stone Brothers BA Falcon.

The victory was bitter-sweet for FPR who once again saw Mark Winterbottom lead after a lightning start.

However he then came under fire from Jamie Whincup on lap 16 when Whincup made contact with Winterbottom and took the lead momentarily before Coulthard cashed in on the fierce fight to sweep to the front.

Winterbottom then reported steering damage and made a visit to the pits before returning to the action briefly before being summoned into the garage for more work and then being released again.

Whincup brought out the third of four safety car periods on lap 23 when he made an uncharacteristic error at the hairpin and fired into the sand trap.

Shortly after the restart Davison made his winning move on Coulthard with the Kiwi loosing another spot in the move to his compatriot van Gisbergen.

The final safety car period was called when Scott McLaughlin had a rough ride through the back of the course suffering damage before stopping his Fujitsu Commodore on the side of the track. McLaughlin has confirmed that he will not be able to make the grid for Race 9.

It then became evident that the race would not go the prescribed distance with the rules stating that it would finish at 1.55pm (local time)  plus one lap.

Both Winterbottom and Whincup finished 23rd and 24th respectively.