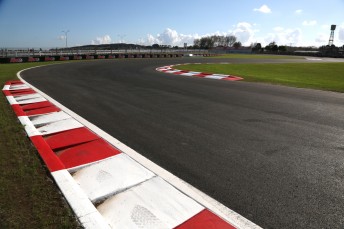 Kerbs at Pukekohe have been proving troublesome, arousing suspicion of tyre failure which hit Mark Winterbottom

Track officials repaired damaged kerbs for a second night in a row at the Pukekohe Park circuit with the problem thought to be linked to Mark Winterbottom’s mystery tyre blowout.

While there was no direct evidence that the troublesome kerbs were conclusively to blame, Ford Performance Racing team principal Tim Edwards said it was one area that had raised suspicion.

The kerbs in question were at the turn four right-hander into the back straight and the high speed right hander at turn 11 coming onto the main straight.

“We can’t really say for sure or not whether it was the kerb but the turn four kerb has been causing problems as well as the turn 11 kerb. They did some repair work to one of the kerbs last night and they intended to do the same again on Saturday night,” Edwards told Speedcafe.

“It’s almost as if we have killed a chinaman or something and ladders and black cats and all those things.”

Edwards said it was possible that Winterbottom’s destroyed left rear tyre was caused by debris either from the kerbs or other non-related debris or a failure of the tyre itself.

The team boss admitted to being bitterly disappointed at the failure at a time he claimed Winterbottom had been cruising in the lead of Race 6.

“I’m really angry to be honest because Frosty was cruising on those tyres and it just happened in an instant. There was absolutely no warning before it let go,” Edwards said.

Edwards has taken away some positives from a day when Winterbottom also found himself mired by a misjudged passing move on Jamie Whincup when he made contact with the four-times series champion forcing both drivers off the track.

“Look Mark had to go for it. He was going for the win.

“But encouraging for Frosty is that he has managed to get his head around the car now and how to make it work and tune. We are finding he is starting to build up that tool box you need.”

A pair of 15-minute qualifying sessions will set the grids for Races 8 and 9 both over 35-laps of the 2.9km circuit.