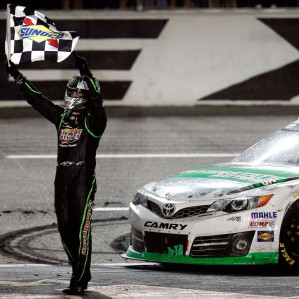 Kyle Busch has taken his second win of the 2013 NASCAR Sprint Cup season at the NRA 500 in Texas.

Starting from pole, the Joe Gibbs Racing Toyota driver had the dominant car for the first half of the race but found himself struggling as track conditions changed throughout the night.

Michael Waltrip Racing’s Martin Truex then took control of the race before Busch vaulted back to the front at the final round of yellow flag pitstops.

Busch jumped away when the race restarted with 20 laps to go and was able to hold out a fast-finishing Truex to the flag.

“Dave Rogers (crew chief) and these guys gave me a great piece today. We ran up front all day long, but if it wasn’t for my pit crew… man, those guys are just awesome.

“They pulled out one heck of a stop right there at the end to put us up front, to give us that lead, and we were able to bring it home.”

Jeff Gordon also challenged for the win in his Chevrolet before a puncture late in the race scuttled his chances.

Australian Marcos Ambrose was just 19th after losing time thanks to contact with David Gilliland.