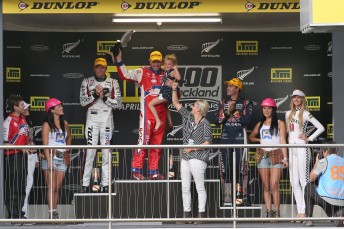 Jason Bright recorded one of the most meaningful wins of his career by ensuring the Jason Richards trophy fell into the right hands at Pukekohe Park.

Bright’s victory in the Race 9 finale choked up his Brad Jones Racing team garage with emotion.

With Richards’ widow Charlotte and daughters Sienna and Olivia and his parents cheering on from the BJR bunker, Bright used all his guile to write the final chapter in a script written to the perfect end play.

Moments before climbing into the BOC Commodore Bright received a wave from Sienna, 5,  a daughter of the late Richards in a final piece of motivation to get the job done in the memory of the former BJR racer.

“I stayed up all night thinking about today. I put a lot of thought into coming up with the right set-up for this meeting,” Bright said.

“Look this is the most meaningful win in my career by miles. Obviously I won Bathurst in 1998 and that was special but it comes around every year,” the teary racer told Speedcafe.

Jamie Whincup rocketted away from poleman Bright at the start but inside the first 10 laps of the 35-lap race Bright nabbed the lead back.

The V8 veteran had extended his lead over Whincup to 3s by lap 25.

In the closing tours of the 2.9km circuit Garth Tander (Holden Racing Team) overtook Whincup for second with the Red Bull driver settling for third after showing his early dash.

Bright’s BJR team-mate Fabian Coulthard finished fourth in another strong display in the Lockwood Commodore. Going into Race 9 Bright was behind Davison on collated points for the weekend but courtesy of the fairytale win he overtook the FPR driver in weekend points to ensure the trophy would travel home to Albury with the BJR outfit.

“There was only one team this trophy was going to. I was absolutely determined. I reckon I had a little bit of JR’s help over the weekend as well,” Bright told Speedcafe.

Will Davison, the Race 8 winner, has speared into the lead of the championship after the New Zealand weekend, moving to 697 points, dislodged previous leader Whincup who is now 16 points in arrears with Craig Lowndes third on 591 points.

Whincup while downcast at the overall outcome of the weekend rightly choose the right words when quizzed about his thoughts on loosing the lead in the Championship.

“I had a tough weekend. But this is one of the great motor racing stories that has unfolded this weekend,” Whincup said.

“Today is not about me or our team.”