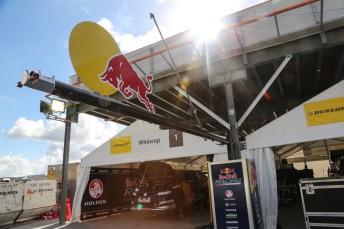 Stewards have handed out large fines to two of the biggest Holden operations on the V8 Supercars grid at Pukekohe.

Both the Red Bull and Walkinshaw teams admitted to officials that they failed to run a fully operational digital video stewards camera.

In outlining the penalties the #66 Commodore of Russell Ingall was found to be in breach of Rule B3.2 in Races 6 and 7.

The stewards imposed a 62-point deduction from the Teams Championship with the Ingall Commodore and issued a $10,000 fine, with $7500 suspended until December 31, 2013.

Triple Eight Race Engineering fell foul of the same offence on Jamie Whincup’s Commodore with stewards handing out a 75-point deduction in the Teams Championship and a $10,000, with $7500 suspended until December 31, 2013.