Alonso and Ferrari strike back in Shanghai

Alonso and Ferrari strike back in Shanghai 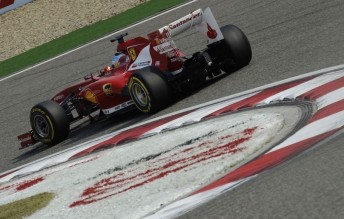 Fernando Alonso and Ferrari have bounced back from a disastrous outing in Sepang three weeks ago to take their first win of the season in the Chinese Grand Prix.

Despite tyre strategies jumbling the order throughout, Alonso put in a commanding performance; taking the lead from pole-sitter Lewis Hamilton in the early stages and not looking back from there.

Hamilton pressured Raikkonen to the line in third, securing a second straight podium for the Mercedes driver.

Sebastian Vettel and Jenson Button took fourth and fifth respectively after running the alternate strategy of using the option tyre in the final stint.

Like the leading trio, Vettel completed three stops before hunting down the final podium place getters in the final five laps. The German eventually fell just 0.2s shy of Hamilton.

Button meanwhile led a large portion of the race thanks to a two-stop schedule, but was unable to fight in the run to the flag thanks to an extended stint on the options.

Felipe Massa ran as high as second in the early laps but lost crucial track position by staying out too long during his first stint on the options and could finish no better than sixth.

Nico Hulkenberg claimed the final point for Sauber, with Perez one place further back in 11th.

Mark Webber started from pitlane following his qualifying disaster, and found himself  amongst the front-runners following the first round of pitstops after electing to swap the options for the primes at the end of the opening lap.

His race ended a short time later as the new left-rear wheel, which had not been properly fitted at the stop, parted company with the RB9, stranding Webber on the circuit.

Post-race Webber has been dealt a three-place grid penalty for next week’s Bahrain GP for Vergne incident.

Esteban Gutierrez and Adrian Sutil were early retirements after the Mexican slammed into the rear of the German’s Force India at the end of the back straight in the early going.

Nico Rosberg also took an early shower after appearing to suffer from suspension issues from the outset.