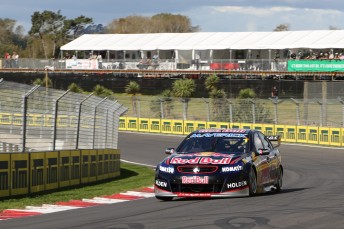 Jamie Whincup has spoiled a perfect qualifying day for Fabian Coulthard by snatching pole for Race 6 at Pukekohe Park.

Whincup was the last car out in the top 10 Shootout and managed to eclipse the time Coulthard had estimated a few minutes earlier with a 1:02.7600s flyer.

Mark Winterbottom will start Race 6 from third after posting a 1:03.0138s lap.

Coulthard’s team-mate Jason Bright will start on the second row after finishing the Shootout with the fourth fastest time in 1:03.0468s ahead of Scott McLaughlin with the GRM racer doing a fabulous job to clock 1:03.2060s.

Craig Lowndes’ hot lap went awry when he outbraked himself into the new chicane and will start from 10th.

However he will be promoted one spot with Garth Tander who finished the shootout eighth quickest relegated to 10th after his practice breach yesterday.

Coulthard had earlier claimed the pole position for Race 7.