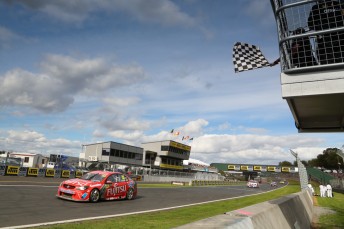 McLaughlin became the fifth different Championship winner this season as Kiwi drivers dominate the V8 year. The victory validated his effort to win a support race at the Australian Grand Prix at Albert Park last month.

More importantly he has now became the youngest winner of an ATCC/V8 Supercars Championship race at 19, surpassing Todd Kelly who was 20 when he won in Canberra in 2000.

The race began in sensational circumstances when Whincup went straight on at the chicane on the opening lap, handing the lead to Winterbottom.

Whincup pitted but was then penalised for speeding in the pitlane and found himself a lap down at the 2.9km circuit.

Meanwhile Winterbottom took charge of the race until he suffered a failure of the left rear tyre on lap 11 before limping into his pit bay for service.

Winterbottom recovered somewhat from the back of the back with Whincup and finished 19th, fearing much better than the four-times Championship winner who languished in 26th, one position ahead of McLaughlin’s team-mate Alex Premat.

Premat had faced a 10 second penalty for a false start and was for a portion of the race acting as a wingman for McLaughlin as he held down second place before experiencing problems in his Commodore which forced him into the garage.

McLaughlin took the lead after Winterbottom’s tyre failure which ignited the large crowd into a frenzy.

The 19-year-old once again showed maturity beyond his years to produce a faultless display in front despite being pressured heavily at times by Bright.

“This is beyond my wildest dreams. I feel like cracking a beer now and celebrating with my team because they have done a fabulous job,” McLaughlin told Speedcafe.

“I definitely felt Brighty behind me putting the pressure on and I just blocked everything out and made sure I hit my marks every lap.”

“We have three races to go and I reckon we have a great chance of getting our hands on that Jason Richards trophy.”