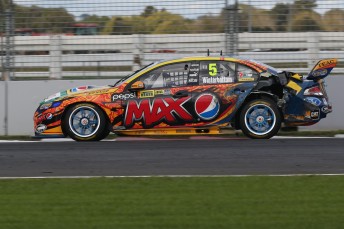 The blown left rear was not the end of Mark Winterbottom’s woes. Pic: Neville Bailey

Winterbottom was left licking his wounds after cruising in the lead in Race 6 then having a tyre blowout before he recovered to finish 19th.

The FPR mainstay’s luck appeared to turn in Race 7 however rather than settling for second place he made a desperate lunge to take the lead from Jamie Whincup which backfired, causing him to be classified 13th.

In the wake of the incident Whincup’s Red Bull boss Roland Dane was fuming, saying Winterbottom was out of control however he conceded the decision for stewards not to pursue an investigation was warranted given that the Ford driver’s finishing position was penalty enough.

When quizzed in the FPR bunker after the race Winterbottom preferred to concentrate on the positives and applauded Whincup for winning.

“Whincup won the race and that should be the focus and I’m not about to take anything away from that,” Winterbottom told Speedcafe.

Winterbottom has taken a positive approach from a scrappy day despite having nothing to show for his pace which was arguably the quickest of the field.

“This morning we were running clean and I wasn’t even pushing just trying to conserve the gap that we had. When a tyre explodes you can’t actually see what has happened. Nothing is conclusive. Obviously the car was very good,” he said.

In relation to whether FPR had the measure of Red Bull in race pace, Winterbottom was buoyed that FPR had a package which is proving quicker than the Brisbane-based outfit.

“We had better race pace in the end. We ran him (Whincup) down and our pace was good but we haven’t got trophies to show for it.

“We have to try and put it to use tomorrow. The car was fast and we were unlucky in some spots and aggressive in others.

“I’m reasonably happy with the day but it didn’t come off as it should have.”

There are two qualifying sessions which will determine the grids respectively for Races 8 and 9 tomorrow.