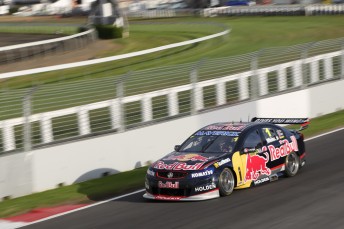 V8 Supercars powerhouse Jamie Whincup survived a last lap scare to win his first race of the season in the ITM 400 Auckland at Pukekohe Park.

Whincup had been holding off the advances of Mark Winterbottom who was launching a late race assault when both speared off over the back of the circuit.

Winterbottom made contact with Whincup when he lunged at the Commodore driver however stewards have not launched any investigation into the incident.

“I had seen Whincup make a few mistakes over that side of the track earlier and knew that was my real chance of grabbing the lead. We had better race pace toward the end and I had to give it a shot,” Winterbottom told Speedcafe.

The Red Bull Racing driver managed to rejoin without any harm however Winterbottom fared less favourably and wound up 13th after challenging for the win in the closing corners.

Polesitter Fabian Coulthard was in the mix for the majority of the race but had a 10s penalty added to his time and was classified in 10th place.

Courtney ended up buried in the sand trap with his race ending after 18 laps while van Gisbergen soldiered on to finish sixth with Bright fourth.

The seventh place finish of Rick Kelly was the best of the year for the debutant Nissan Altima with Norton 360 Nissan driver James Moffat also claiming a top 10 finish with a ninth place.