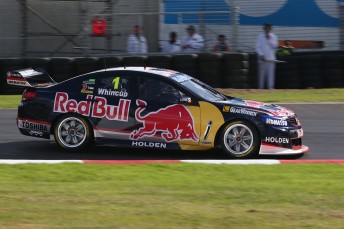 Four-times V8 Supercars champion Jamie Whincup has claimed the fastest time in the opening qualifying session for the ITM 400 Auckland at Pukekohe Park.

The cars are being prepared for the the second qualifying session also over 15 minutes ahead of a top 10 shootout which will determined the order of the first five rows for the Race 6.