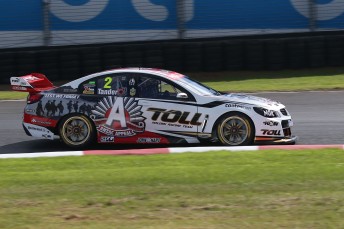 Stewards have handed out grid penalties to Garth Tander and Russell Ingall for infringements in the second practice session at Pukekohe.

Tander (Holden Racing Team) was found to have crossed the control line twice after the chequered flag.

Ingall had been found to have also crossed the control line twice after the chequered flag.

Both drivers have been penalised two grid positions for Race 6.

Ingall also copped a $350 fine for speeding in the pitlane in Practice 3.

An investigation into an incident between Dean Fiore and Todd Kelly in Practice 3 was launched but subsequently neither driver was found to be in breach of the rules and no action was taken.