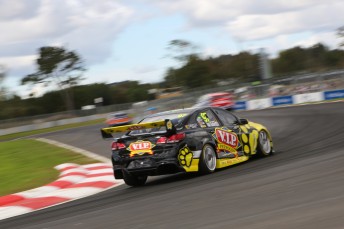 Young star Shane van Gisbergen put in a monster lap to top the time sheets in Practice 2 of the V8 Supercars round at Pukekohe Park.

In the dying seconds of the 30-minute run, van Gisbergen posted the quickest time, lapping the circuit in 1:03.2157s.

van Gisbergen was finally allowed to let his driving do the talking after being pursued by the local media trying to breath new life into the old story of his departure last year from Stone Brothers in the lead up to today’s opening day of the ITM 400 Auckland.

It continued the domination of Kiwi drivers at the return meeting to the South Auckland circuit with van Gisbergen replicating compatriot Fabian Coulthard’s effort in the opening run earlier in the morning.

Jason Bright managed to also put in a late flyer to dislodge Jamie Whincup from second fastest after unleashing a 1:03.5465s lap in his BJR-prepared BOC Commodore.

Whincup was third fastest as the Red Bull Racing Australia Holden team continue to work on maximising an effective set-up at the revised circuit, clocking a best of 1:03.7034s.

The third of four practice sessions will start at 14.00, New Zealand time.