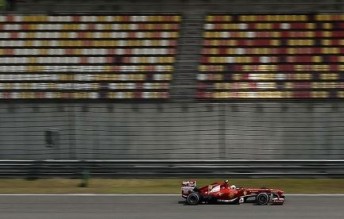 The Brazilian, who has out-qualified team-mate Fernando Alonso for each of the last four races, lapped 0.15s quicker than second fastest man Kimi Raikkonen in the 90 minute session.

Fernando Alonso, who has never been out-qualified by a team-mate for five consecutive races in his entire Grand Prix career, was third fastest.

Practice 1 pace-setter Nico Rosberg had to settle for fourth, albeit within 0.5s of Massa’s benchmark.

Sergio Perez again struck trouble in the second McLaren, clipping the barriers after spinning through the gravel at Turn 8.