HRT digs in to respect the ANZAC spirit

HRT digs in to respect the ANZAC spirit 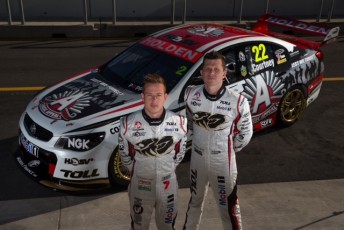 Both factory Commodores for Garth Tander and James Courtney will be emblazoned with a contemporary depiction of the ANZAC Rising Sun and silhouettes of Australian and New Zealand soldiers walking side-by-side on the battlefields.

The unique tribute will raise the profile of the RSL’s ANZAC Appeal which runs up to ANZAC Day, April 25, and the RSA’s Poppy Day Appeal scheduled for next Friday (April 19).

Both former V8 Supercars champions Tander (2007) and Courtney (2010) feel a deep sense of pride by running the ANZAC battle gear as the series makes its return to the upgraded south Auckland circuit for the first time since 2007.

“Honoured and proud is the best description of how I feel about being able to pay tribute to the Spirit of ANZAC and to the brave men and women that have served our two countries,” Tander said. 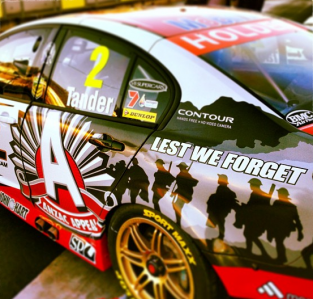 “ANZAC Day is no longer just about the original soldiers who landed at Gallipoli in 1915, nor is it just a public holiday.

“The Spirit of ANZAC is a reflection of our life’s values – courage, compassion, camaraderie and commitment, and being there to help a mate.

“I’m proud we have the opportunity to help nurture its meaning for future generations, and remember the sacrifices made so we can enjoy the freedoms we have today.”

Sydney-born Gold Coast-based racer Courtney will don a custom painted helmet to commemorate the HRT tribute to the ANZACS.

“I’m proud that the Holden Racing Team is in a position where we can acknowledge and respect such a special day in Australia and New Zealand’s history,” Courtney said.

“Our tribute not only commemorates those in the original Gallipoli campaign, but every person that has served our countries ever since – including those still serving today.

“The RSL in Australia and New Zealand’s RSA have done incredible work for generations helping veterans and their families when they need it.

“It is important we continue to recognise these organisations and support their fund raising appeals so they can continue to provide such valuable support.”

The striking ANZAC-themed VF Commodores will roll out onto the track for the first of four practice sessions today at 10.10am (NZ time).

It will be the first of 13 sessions in a hectic schedule for V8 Supercars that includes four qualifying sessions, a top 10 shootout and four races.

Here is the video of theHRT paint scheme tribute to ANZAC