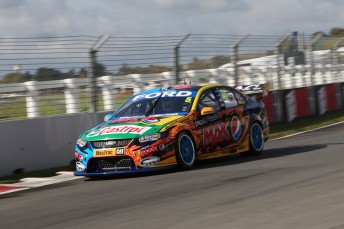 Ford ace Mark Winterbottom saved his best until last to crack the fastest time of the day in the final practice session at Pukekohe Park.

Whincup was the first driver to dip under the 1:03s and ended up second fastest with a 1:02.7069s lap with Fabian Coulthard third fastest.

Lowndes was next best with Shane van Gisbergen fifth after topping the second and third sessions of the day at the 2.9km circuit.

With the V8 Supercars subjected to a huge amount of track time across the weekend it was difficult to deduce which drivers were on decent rubber and how they were using they allocation.

Winterbottom, like Whincup, used better hard compound Dunlop tyres at the end, on a day when the V8 Supercars cut their first competitive laps on the revised 2.9km Pukekohe layout.

“It’s always a good fun place and I’ve always enjoy it here. I actually enjoy this place more than Hamilton the way the circuit is.”

Whincup said Red Bull had persevered with running old tyres on his Commodore most of the day before bolting on a fresh set toward the end.

“I would have liked another set of tyres though. Two hours of running on the one set then we just threw another set on right at the end. We are massively limited on tyres which isn’t fun but that’s okay everyone is in the same boat,” Whincup said.

Whincup is looking at consolidating his lead in the Championship across the four-race format this weekend. Whincup, second placed Will Davison and third placed James Courtney have not yet won a race this season.

“That’s been a common theme this week with people asking me how I’m coping with the lull. But I’ve had four or five podiums. Yes I’d like to win but we’ve got our issues we are dealing with and its only early days,” Whincup said.

Jono Webb, 19th in the Tekno Autosports Commodore, was on different tyre strategy than his team-mate Shane van Gisbergen who starred by topping two of the sessions and finished with the fifth fastest time.

“I really don’t know what Shane was on tyre wise to tell you the truth. There are a lot of sessions here across the weekend so it will be a matter of managing your sets of tyres,” Webb said.

Coulthard remained resolute on his primary goal of trying to win the Jason Richards trophy at the end of the weekend.

The double-race winner at Symmons Plains last week reflects the heightened emotions which are running through the Brad Jones Racing outfit, the former team of the late Richards.

“I’m sure if you ask any one of us to win that Jason Richards trophy is the goal,” Coulthard said.