A former Triple Eight Race Engineering V8 Supercar, which started life as a Ford Falcon chassis before being reborn as the squad’s first Holden Commodore, is set to race in Asia.

The car, dubbed 888-022, was sold by the Brisbane-based team earlier this year to Kiwi racer Craig Corliss, who will ship it to Thailand where it’ll compete in the Thailand Super Car Series.

The car will also appear in the GT support races to the V8 Supercars Championship at Pukekohe this weekend.

Corliss’ latest acquisition is undoubtedly unique as it is the only V8 Supercar to be converted from a Ford to a Holden.

Originally destined for Team IntaRacing and Marcus Marshall, the chassis was constructed as an FG Falcon at Triple Eight in mid-2009.

The demise of the Inta operation and confirmation of TeamVodafone’s switch to Holden soon saw plans change, however.

The car was therefore finished as a VE Commodore, with Triple Eight undertaking its exploratory Holden testing with the ‘hybrid’ vehicle in December, 2009. 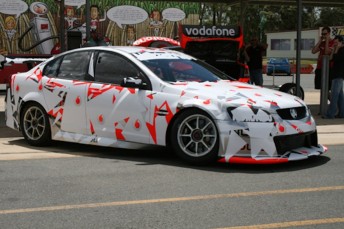 Not eligible to race as a V8 Supercar in its new guise, the chassis was twice driven by Jenson Button in Vodafone funded car swaps (at Albert Park and Bathurst), and was also the ride of choice for Filipino racer Enzo Pastor’s V8 Supercar test in late 2011.

V8 Supercar chassis historian Aaron Noonan confirmed the identity of the chassis to Speedcafe.com, with the car having been sold via his own V8Sleuth.com.au website.

“Although this car was never a V8 Supercar race car,  it’s got a remarkable history in terms of how it came together and who has driven it,” he said.

“It’s not that surprising to see it go overseas as, being a Ford chassis underneath, the only way it’d be eligible for the Dunlop Series would be if it was fully converted back into an FG and given special dispensation, given that it never raced in the main V8 Supercars Championship.

“There are as many as 20 V8 Supercars that have made their way offshore over the years, some that are racing and some that are inactive. It’s always fascinating to track where they go.”

The car is believed to have retained a Ford engine and will be raced by Corliss under the ‘Kiwi Racing Team’ banner.