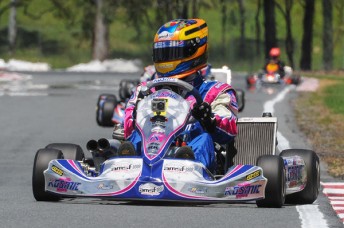 Kosmic Racing Australia drivers Dimitri Agathos and Joshua Smith will continue the flow of Australian kart racers broadening their horizons in Europe over the coming months.

The pair will line up alongside fellow Australian Joseph Mawson, who is based full-time in Europe with the Top Kart Racing Team in 2013, in the two-round CIK-FIA European KF Championships in Spain and Italy during June and July.

The pair will be heading over to complete a test day with the factory team to help familiarize themselves with the team and their mechanics for the championships on the weekend of June 8/9 at the Alcaniz circuit in Spain. They will then compete in the opening round of the championship at the same venue the following weekend. Round two will be contested in Italy on July 18-21.

With in excess of 100 entries expected for the championship, the goal for both Agathos and Smith will be simply to make the 34-kart final, which would be a significant achievement within itself. The pair is under no illusion of the challenge that lies ahead of them at the event.

For Smith, who was recently announced as a part of the Australian Motor Sport Foundation Rookies Rising Stars program for the second year, he believes the experience he gained last year will prepare him for the upcoming championship.

“After last year I have been very keen to go back overseas and race. This time will be another experience for me as last year it was in Macau, this time it’s in the heartland of karting – Europe,” said Smith.

“I have been working very hard on my fitness to make sure I am ready for the challenge and feeling very confident at the moment after being included once again in the AMSF Rookie Rising Star program, this is a huge honor for me and I will be doing everything I can to repay their faith in me.”

Agathos and Smith will next take to the circuit in Australia in two weeks time (April 27/28) for round two of the Castrol EDGE CIK Stars of Karting Series at Bolivar Raceway in South Australia.