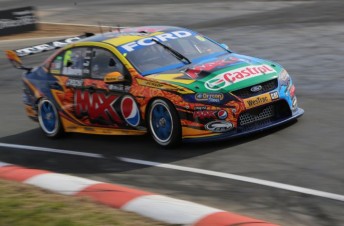 The 38-year-old, who was left on the sidelines this season following the downsizing of Dick Johnson Racing, has signed a two-year enduro deal with the team.

Although other pairings are yet to be confirmed, it is expected that Richards and Canto will return alongside previous partners Mark Winterbottom and David Reynolds respectively, leaving Mostert with the team’s new-for-2013 recruit, Alex Davison.

“I am excited to have the opportunity to drive for FPR and to be alongside Will, who is always one of the favourites to win the race,” said Owen, who was first linked to the team by Speedcafe.com last month.

“When he chased me so hard after I lost my full-time drive it showed he thinks I am integral part of him challenging for wins so it was a no-brainer to sign with the team.”

Although the duo have never been full-time team-mates or an endurance pairing in their careers previously, Davison and Owen worked together as part of Dick Johnson Racing’s two-car endurance campaign in 2008 and Walkinshaw Racing’s four-car  assault a year later.

“It was my number one preference for the enduros to have Steve driving with me as he is easily the pick of the drivers available,” said Davison.

“I lobbied hard to get him on board so I am glad it has come off as we get along very well.

“He was at DJR and Walkinshaw when I was and he shared my car in co-driver sessions over the years and physically he fits in my seat and seat belts, so that’s a bonus.

“Steve is extremely fast, easy to work with and has excelled at all of the circuits in the Endurance Cup so that all makes him the perfect choice.”

Owen is a two-time winner of the V8 Supercars Development Series and took his one-and-only V8 Supercars Championship race win alongside Jamie Whincup on the Gold Coast in 2010.