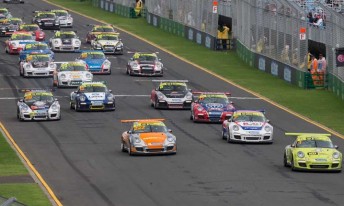 The Carrera Cup field last time out at Albert Park

Erebus Motorsport’s V8 Supercars drivers Tim Slade and Lee Holdsworth have been confirmed as starters in next month’s third round of the 2013 Carrera Cup Australia.

The deal was brokered by PCM’s Carrera Cup pace-setter Craig Baird, who later this year is expected to team with Holdsworth in the V8 Supercars endurance races for a second consecutive season.

The Porsche event will mark the second departure away from V8 Supercars this year for both Slade and Holdsworth, who competed together at the Bathurst 12 Hour in an Erebus Mercedes SLS GT3 car.

Slade says he’s looking forward to a fun but competitive Carrera Cup weekend, which promises to throw up far more potential winners than usual thanks to the co-driver pairings. “The Pro-Am concept, having a Pro and an Elite driver in every car, should even the playing field a lot,” said the HHA Mercedes regular.

“I’m really looking forward to the event. It will be a fun race weekend, but at the same time it’s a round of the Carrera Cup championship, so there is a serious side as well.

“From what I understand the Porsche 911 GT3 Cup cars are very enjoyable to drive, and at a track like Sydney Motorsport Park, it should be great fun.”

The weekend will feature two 60 minute races in which a compulsory driver-change pitstop must be completed.

Each race will enjoy its own qualifying session – one to be tackled by the professionals, and the other by the amateurs.

Slade and Holdsworth will compete in the May 25-26 Rennsport event just a week after racing their V8 Supercars in Austin, Texas, as the Australian touring car category ventures to the United States of America for the first time.