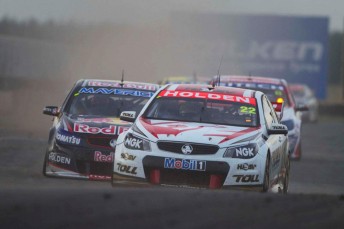 James Courtney believes that V8 Supercars missed a significant opportunity to improve the quality of racing in the championship by failing to upgrade from its traditional spool differential under the Car of the Future regulations.

Although drivers have generally noted improved handling traits from the 2013 vehicles thanks largely to the move to independent rear suspension and a better weight distribution, the locked differential remains a distinctive feature.

V8 Supercars investigated moving to an alternative differential after launching the COTF concept in 2010, with its testing including the running of Salisbury (a type of limited slip differential) and Detroit Locker (which alternates between locked and open) set-ups across seven top-line cars during practice for that year’s Hidden Valley meeting.

The idea was eventually abandoned amid the widespread changes to the remainder of the technical package, but Courtney believes such a step should be reconsidered for the future.

“I think it’s probably a nicer car to drive than what we had last year,” said the 2010 champion, speaking generically of the new-generation vehicles. 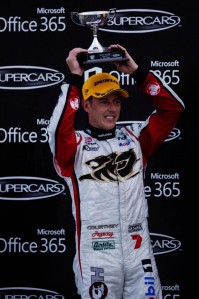 “It rotates a bit nicer but I think we could have put a proper diff in it which would have made it a heap better.

“We spent all that money and it’s something easily we could have fixed. I think it’d open the lines up even more and allow the car to rotate a lot easier.

“With this car it’s still quite a unique driving style. Fundamentally we get to the mid-part of the corner and the diff still locks, so it’s still wanting to push on.

“I think it’s something that could be a nice thing to have in a year or whenever. It would be a massive bonus.”

Courtney says he’s confident that the team is moving in the right direction with its new cars.

It is understood that the squad has significant suspension upgrades coming for Barbagallo in May, while its engine development program continues to be assisted by Roger Higgins’ InnoV8 firm, which supplies full motors to Dick Johnson Racing.

“We’ve got a lot of updates on the way for the car, it’s just killing me waiting for them,” said Courtney.

“If I was any better mechanically I’d get in there and help out, but it’s best I stay away (from that side of it).”

Ingall had originally been slated to receive a new chassis ahead of this weekend’s Pukekohe meeting, although that plan was postponed indefinitely once hopes to have Greg Murphy in a wildcard entry for the New Zealand meeting came to naught.