Scott Pye’s inability to compete at Pukekohe next weekend following his crash at Symmons Plains is set to increase pressure on V8 Supercars to avoid scheduling back-to-back races in future.

Pye walked away from a sickening crash after he suffered a complete brake failure during the closing stages of Sunday’s fifth race of the 2013 championship.

The #80 Ekol Holden was too badly damaged to be repaired in time to be flown to New Zealand on Tuesday with the remaining 27 cars.

With no teams currently possessing a spare car that fits the 2013 technical regulations, Pye has been left on the sidelines for New Zealand.

Brad Jones Racing also had considerable damage to fix at Symmons Plains last night on its David Wall-driven entry, while the newness of the 2013 regulations ensure that others are having to deal with hurriedly refurbishing failed engines (Nissan) and the continually troublesome transaxle gearboxes.

Teams need to have their trucks packed and ready to return to Melbourne via ferry by midday today ahead of the two scheduled plane trips from Melbourne to New Zealand on Tuesday.

The scheduling means that Melbourne-based personnel will have a maximum of two nights at home prior to New Zealand, while many of the Queenslanders will not see their families for close to two weeks. 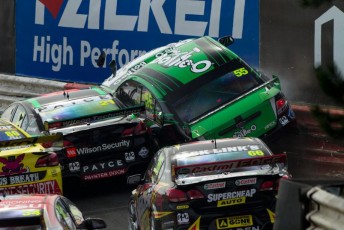 The consecutive Symmons Plains and Pukekohe events was one of two back-to-back pairings scheduled for this season, with the dreaded Gold Coast/Abu Dhabi double having only been avoided by the pre-season cancellation of the trip to the UAE.

“I along with pretty much everyone in the paddock am dead against back-to-back races,” he said.

“There are occasions when they’re necessary but we’re not fans of them because it creates too much pressure and occasionally it can reach breaking point.

“More particularly, the teams have been dead against having back-to-backs this year when we’re short of parts, short of cars and everything else, due to the Car of the Future.

“You won’t get any argument about it from us, we’re absolutely not fans of having back-to-backs and we never will be.”

Dane, whose Triple Eight Race Engineering operation built Pye’s Lucas Dumbrell Motorsport-run Commodore, added that he was relieved to see the 23-year-old walk away from his crash unscathed.

“It was one of the most violent accidents we’ve seen and I think the car itself stood up better than you’d expect,” he said.

“Moving the engine back was probably a good thing because I think the engine is pretty much undamaged in the car.

Dane has played a major role in Pye’s career, backing the South Australian born driver’s tilt at the British Formula Ford and Formula 3 Championships before running him in a Triple Eight Holden in last year’s Dunlop Series.