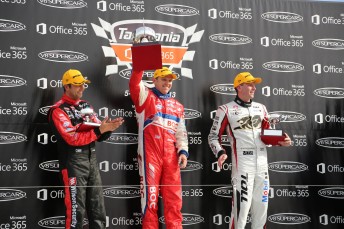 Holden has commenced the new era of V8 Supercar racing in stunning style by dominating the early stages of the season.

In Tasmania Brad Jones Racing drivers Fabian Coulthard (two wins) and Jason Bright (one win) dominated the meeting leaving the VF Commodore unbeaten in the Championship as well as the non-championship Australian Grand Prix races in 2013.

Kiwis van Gisbergen, Coulthard and McLaughlin will ride a tidal wave of local support at Pukekohe as they attempt to continue Holden’s stranglehold on the Championship.

It has been slim pickings for Ford, although Mark Winterbottom came agonisingly close to a breakthrough before finishing second to Coulthard in the Symmons finale.

In fact Ford have only finished on the podium three times this year in the Championship races with Winterbottom grabbing third in the opening 60/60 Symmons race while his FPR team-mate Will Davison finished in Lowndes’ wake in the opening Adelaide leg.

Have a vote on the poll below.