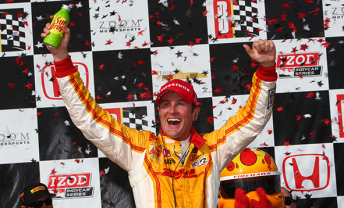 Ryan Hunter-Reay recorded a thrilling victory in the Honda Indy Grand Prix of Alabama to break a Penske domination of the Barber Motorsports Park circuit.

The reigning IZOD IndyCar series champion Hunter-Reay prevailed after taking the lead inside the last 15 laps of the 90 lap race in round two of the Championship.

Helio Castroneves had held the lead and was on track to give Penske a fourth consecutive win at the circuit before Hunter-Reay swooped.

Penske driver Will Power was in the mix however could only manage fifth at a track where he has won the last two IndyCar races and was the only runner in the field to adopt a two-pit stop strategy.

After a precarious start to the defence of his title when he was 18th at St Petersburg, Hunter-Reay regained his winning form to score his first victory since the Baltimore race last year.

“”I was driving my tail off trying to stay in front of Dixon,” Hunter-Reay said.

“Will (Power) did a good job staying in front of me on blacks, not sure how he did it.”

The outcome had a dramatic effect on the Championship standings with Hunter-Reay rocketing from 13th to be third in the points behind Castroneves and Dixon.

It was the fourth consecutive time that Dixon has finished runner-up at the Barber circuit.

James Hinchcliffe’s fortunes turned full circle after winning the opening round at St Petersburg, when he broke a wheel on his Andretti Dallara after an incident with Oriol Servia and Graham Rahal on a frantic opening lap.

Points after 2 of 19 rounds