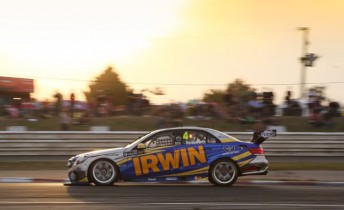 Lee Holdsworth on his way to 13th in Race 5

Erebus Motorsport CEO Ryan Maddison says he was ecstatic to see Lee Holdsworth score a 13th place finish for the evolving Mercedes V8 Supercars project in the final race of the weekend at Symmons Plains.

The Mercedes AMG customer squad had struggled to make its equipment fast or reliable across the opening two events of the season in Adelaide and Melbourne, with engine problems the biggest culprit.

Maddison led a trio of Australian team members to Germany prior to Easter to discuss the team’s progress, while three of HWA’s top engineers having made the trek to Australasia to help the team through the Symmons Plains/Pukekohe double-header.

The first of two major engine upgrades for the season is set to come online for May’s Barbagallo event, with the German arm of the operation currently working on a package that will be headlined by a new induction system and a switch to a cable throttle.

Although team-mates Tim Slade and Maro Engel had difficult weekends, Holdsworth was able to qualify 13th for Race 4 before finishing in that some position in Race 5.

“I am absolutely ecstatic with Lee’s result,” said Maddison.

“To be able to run and compete mid-pack probably exceeded my expectations for this short track event and to produce the result they have is probably also a little premature for what I expected, none the less we came here to race and we’ll take it.

“This round we managed our way through a number of technical components relating to our performance and we wanted to run cleanly as a primary focus.

“We ticked those boxes and the cars are basically straight unlike some other cars out there, so we don’t have that negative within the next few days of extensive repair work.

“It’s really rewarding at this early stage to put cars out there that can race and that we can fine tune within the competitive envelope.

“We are successfully moving out of the build phase and into the development phase as expected which is nice.”

Holdsworth meanwhile described the Symmons performance as a key milestone in the project.

“We’ve made some massive improvements since the AGP with the car, and the step we’ve made from Adelaide to now is a huge step in terms of the way the car handles and set-up and everything,” he said.

“Every time we get on track we understand more about what the car needs and what it responds to.

“To be honest, for Erebus Motorsport and IRWIN Racing this is a milestone this weekend.

“It’s promising signs for what’s to come for the rest of the year.”