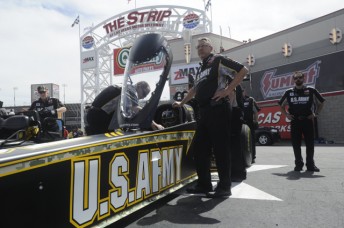 Courtney Force has moved to a 14 point lead of the NHRA Mello Yello Drag Racing Series Funny Car Championship after finishing runner up in the fourth round of proceedings at The Strip in Las Vegas, being edged out by Cruz Pedregon, whilst Tony Schumacher has moved Antron Brown from the top of the Top Fuel points with his victory in Top Fuel.

In the Funny Car final, Force hazed her tyres off the line, allowing Pedregon to get his second final round win over the second generation pilot. It was Force’s third final round appearance from the last five events.

After being fifth quickest qualifier, Pedregon charged by Gary Densham, Johnny Gray (who earlier in the weekend had a monster blow-up) and Alexis DeJoria to make the final, whilst Force got around Tim Wilkerson, Del Worsham and Matt Hagan. The elimination of Hagan was enough for Force to ascend to the Championship lead.

After launching marginally slower than Brown, Schumacher was able to fire around his arch-rival, taking a win by a tenth of a second.

Fastest qualifier Brown eliminated Brandon Bernstein, Morgan Lucas and Terry McMillen in his part of the ladder, whilst Schumacher – who was third quickest post-qualifying – got his way past Troy Buff, Brittany Force and Spencer Massey. It was Force’s first ever Mello Yello Series round win, getting by heavy-hitter, Doug Kalitta and becoming the fourth member of the Force family to have taken a round win in NHRA competition, joining father John and sister’s Ashley and Courtney.

Schumacher’s advantage in the points chase is 14 over Brown.

Australian Dave Grubnic was eliminated in the second round by Terry McMillen after earlier beating Shawn Langdon. The Rapisarda Autosport International team elected not to race in Vegas, however Crew Chief, Lee Beard assisted Terry McMillen with his tuning. Allen Johnson’s great form of 2013 continued, taking his second final round win of the season plus picking up $50,000 in Saturday’s K&N Air Filters Horsepower Challenge All-Star event. By going on to take victory in the final round over Erica Enders-Stevens, he collected a further $25,000 in bonus prizemoney, all up walking away from Vegas with $100,000 in his back pocket and a four point Championship lead.

He was granted the win when Enders-Stevens was forced to shut her car off at half-track.

“It seems like our car really likes altitude tracks, and hats off to my guys for pulling off the sweep today,” said Johnson. “Erica is a great driver and has come into her own and she makes me rise to the occasion. We’re good friends, but the friendship kind of goes on hold when the helmet goes on. It’s awesome to win both races. It takes a lot of money to run these cars so anytime you can infuse a little extra money into the budget it is a good thing.”

Mike Edwards was another to have a solid weekend. Sitting second in the points standings, no other driver has set the top time in qualifying all season. He was eliminated in the semi-finals by Enders-Stevens.

Earlier in the day, Enders-Stevens got by Greg Stanfield and Rickie Jones in her path to the final, whilst Johnson took his 18th career win beating out JR Carr. Vincent Nobile and Jeg Coughlin.

The next round of the NHRA Mello Yello Series will be the Four-Wide Nationals at Z-MAX Dragway April 19-21.