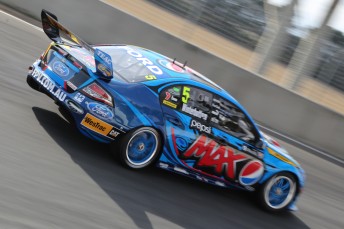 Mark Winterbottom has scored Ford’s first pole position of the 2013 season in the second of two back-to-back qualifying sessions on Sunday morning at Symmons Plains.

The 15 minute Race 5 qualifying, run just 10 minutes after the conclusion of Race 4 qualifying, saw Winterbottom record a best of 51.21s on his final lap.

The Kiwi had briefly held the top spot before Winterbottom put his definitive time down with 30 seconds on the clock.

“It’s so tight out there it just depends on what lap you get it on and how you go,” said Winterbottom afterward.

“It’s good for Ford fans. They’ve been a little bit down on how many Holdens have been doing well and hopefully today is the day we’ll get one back.”

Jamie Whincup repeated his Race 4 qualifying with third ahead of an improved James Courtney and the consistently impressive Scott McLaughlin.

Craig Lowndes and Garth Tander both have work to do after managing just 11th and 13th respectively while Lee Holdsworth was again the best of the Mercedes runners in 15th.

Alex Premat endured a difficult session in the #34 Fujitsu GRM Holden, spinning wildly at Turn 7 during his first run after contact with Dean Fiore. The incident is set to be investigated by the stewards prior to the race.

See below for the full Race 5 qualifying result