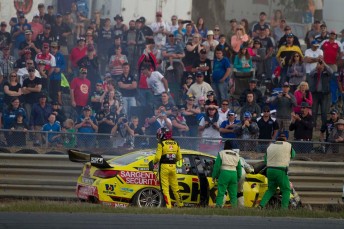 V8 Supercars is working alongside Lucas Dumbrell Motorsport and Triple Eight Race Engineering to investigate the cause of the brake failure that sent Scott Pye careening into the Turn 2 fence at Symmons Plains on Sunday.

The 23-year-old escaped injury despite collecting the armco barrier at the exit of Turn 2 head-on at an estimated 160km/h.

Pye had reported brake problems as early as the formation lap, and found himself having to continually pump the brake pedal in order to find pressure in the laps prior to his accident.

Such an occurrence is often caused by either a fluid leak or pad knock-off due to warping of the discs.

V8 Supercars is expected to take some of the braking components back to Queensland for further assessment.

Today’s issue is thought to be unrelated to the failures of the new AP Racing supplied Car of the Future brake discs that caused headlines pre-season.

V8 Supercars’ general manager of motorsport, Damien White, told Speedcafe.com at the circuit on Sunday night that it was too early to comment on any aspect of the problem or investigation.

Pye offered the following explanation of how the situation unfolded from his perspective.

“I felt something on the warm-up lap and thought there must have been an issue with the brakes,” he told Speedcafe.com.

“I didn’t know if it was a leak or something, so we got the guys to bleed the brakes on the grid before the start.

“With 25 or 30 laps to go I started to feel a long pedal so I backed away from GT (Garth Tander) to try and get some clean air and cruise the car to the end pretty much.

“I had been pumping it and it was saving it a little bit but then there was just no warning when it went.”

Pye will miss next weekend’s V8 Supercars Championship event in Auckland, New Zealand, due to the damage sustained to his car in the shunt.