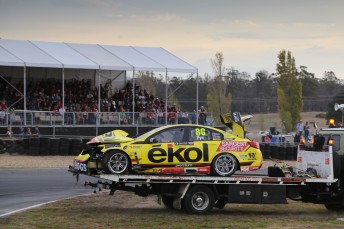 Scott Pye was lucky to escape with minor injuries from an enormous accident in the final race of the weekend at Symmons Plains.

The Lucas Dumbrell Motorsport Holden driver endured a complete brake failure with 10 of the race’s 42 laps remaining, spearing the rookie across the grass and into the Turn 2 exit fence at high speed.

The ferocity of the impact shot the back of the Triple Eight-built Holden into the air, before Pye extracted himself from the car and walked away.

The former South Australian described his injuries as consisting of “a sprained wrist, bleeding on my skin on the back of my leg and a bit of a headache”.

The 23-year-old said it was the scariest accident of his career, describing the feeling as “like being hit by a Mack truck standing still”.

“It was one of those crashes that you see form a long way away and there was nothing I could do,” he said.

“Instinctively though I kept trying to turn the car and brake it, even though the pedal was going to the floor.

“Crashes don’t usually scare you because you don’t see them coming but this was one where I knew it was going to hurt.”

The Dunlop Series graduate said he does not have an issue with the design of the wall he hit, which consists of an armco fence covering an earth-filled tyre bank.

“At that speed and that angle I don’t think it’d make much of a difference,” he said of whether there should be an extra layer of tyres in front of the armco.

“I saw the armco wall took some of the impact and got pushed back.

“It’s a freak accident, it’s one of those things. I don’t know what you could do about it.

“I’m fine so I’m not complaining about anything.”

Pye confirmed that he had been battling brake problems since the start of the race, with the team having bled the system on the grid.