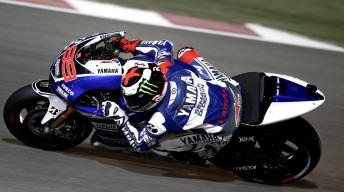 Jorge Lorenzo will start from pole in Qatar

Defending MotoGP World Champion Jorge Lorenzo left it to the end to edge Cal Crutchlow for pole position at the season-opening Qatar Grand Prix at the Losail Circuit.

The British Tech3 Yamaha rider sat atop of the timesheets halfway through the 15-minute QP2 session, before the Yamaha factory rider set a time of 1:54.714 to outpace the field by 0.202s

“When he did a 54.9, I didn’t think it would be possible to beat it, but I put in everything I could and did a very good lap. So we’re in pole position and have a good advantage and pace for tomorrow.

“I hope to make a good start, just focusing on our own pace.”

Honda rider Dani Pedrosa was third fastest after a session a tough session which included an incident where he and new team-mate Marc Márquez nearly collided.

Andrea Dovizioso had the paddock talking qualifying his Ducati in fourth, while Stefan Bradl also impressed with fifth on his LCR Honda.

Márquez will start sixth for his MotoGP debut, one place ahead of Yamaha returnee Valentino Rossi.

The big casualty of QP1 was Ben Spies. The Pramac Ducati rider failed to make it into the final session, not helped by a crash during final practice just minutes earlier.