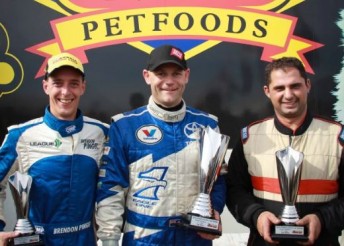 Gowans flanked by Masini and Pingel

The Valvoline-backed Toyota Aurion driver scored a second, a fourth and two wins from the four races to secure the round victory.

New South Welshman Maurice Masini was the best of the rest on this occasion – the Ford driver recording a win of his own in Race 1.

Toyota-mounted Travis Edwards was the weekend’s other race winner, but couldn’t match the consistency of Brendon Pingel, who took his Holden Cruze to the final place on the weekend podium.

Less than a second covered the top two cars at the flag in each of the four races, with Gowans defeating Masini by a scant 0.2s in the final.

The 2013 Aussie Racing Cars Series continues with the V8 Supercars at Queensland Raceway on July 27-28.