Bright leads the pack away at the start #V8SC

Jason Bright has become the fourth different winner in as many races this season with a dominant drive from pole at Symmons Plains.

The win marks Bright’s first since Winton, 2011, and the second for Brad Jones Racing in two days.

Tander overtook front-row starter Coulthard at the Turn 4 hairpin on the opening lap as the Lockwood Holden was momentarily held up by the sister car of Bright.

Bright had accidentally plucked neutral in the middle of the first gear corner, later apologising to his team for costing them a one-two.

Jamie Whincup shadowed Coulthard to the finish in fourth to marginally extend his points lead.

Ford Performance Racing duo Will Davison and Mark Winterbottom filled fifth and sixth respectively, with the latter getting the better of Scott McLaughlin on the penultimate lap after an extended duel. 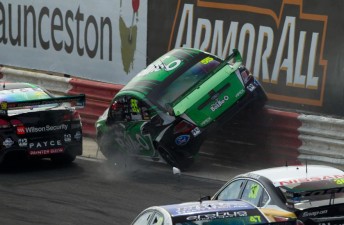 A moment of misfortune for David Reynolds punctuated a largely uneventful race. The Bottle-O Ford suffered heavy damage when it was squeezed into the outside wall at Turn 4 on the second lap.

The green Falcon rode up the fence after being bumped during a three-wide squeeze with Michael Caruso and David Wall. Relatively minor damage to the Brad Jones Racing Holden also forced Wall out of the race.

The Bottle-O FPR team is currently scrambling to fix the damaged Falcon in time for Race 5 later today.

Reynolds and Wall were the only two drivers to visit pitlane during the race, with minimal tyre degredation and the lack of a late Safety Car ensuring no one elected for a late stop.

The third and final race of the weekend will kick off at 1630.