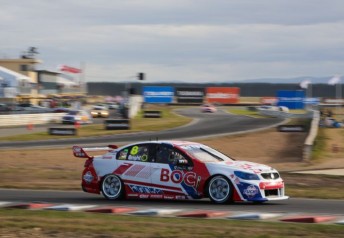 Jason Bright will start Race 4 of the V8 Supercars Championship from pole position after edging out team-mate Fabian Coulthard by just 0.04s in a short and sharp qualifying session.

Bright and Coulthard traded the fastest time inside the final four minutes, with the Team BOC Holden’s penultimate lap of 51.19s proving enough for the top spot.

Jamie Whincup ended up third after appearing one of the worst affected by the traffic during his final run.

Garth Tander ran slightly off-sequence throughout the 15 minutes, but managed fourth thanks to his final lap.

Lee Holdsworth was an impressive 13th in the lead Erebus Mercedes and will share the seventh row with Clipsal 500 winner Shane van Gisbergen.

As was the case in Race 3 qualifying, Van Gisbergen’s session included a wild trip through the circuit’s outfield, this time at Turn 6.

A slender 10 minute break will follow before a second 15 minute session to set the grid for Race 5.

See below for the full Race 4 starting order